A Gospel of Peace in the Midst of Empire

To read Romans from beginning to end, from letter opening to final doxology, is to retrace the steps of Paul. To read Romans front to back was what Paul certainly intended. But to read Romans forward may have kept the full message of Romans from being perceived. Reading forward has led readers to classify Romans as abstract and systematic theology, as a letter unstained by real pastoral concerns.

But what if a different strategy were adopted? Could it be that the secret to understanding the relationship between theology and life, the key to unlocking Romans, is to begin at the letter’s end? Scot McKnight does exactly this in  Reading Romans Backwards.

McKnight begins with Romans 12–16, foregrounding the problems that beleaguered the house churches in Rome. Beginning with the end places readers right in the middle of a community deeply divided between the strong and the weak, each side dug in on their position. The strong assert social power and privilege, while the weak claim an elected advantage in Israel’s history. Continuing to work in reverse, McKnight unpacks the big themes of Romans 9–11—God’s unfailing, but always surprising, purposes and the future of Israel—to reveal Paul’s specific and pastoral message for both the weak and the strong in Rome. Finally, McKnight shows how the widely regarded "universal" sinfulness of Romans 1–4, which is so often read as simply an abstract soteriological scheme, applies to a particular rhetorical character’s sinfulness and has a polemical challenge. Romans 5–8 equally levels the ground with the assertion that both groups, once trapped in a world controlled by sin, flesh, and systemic evil, can now live a life in the Spirit. In Paul’s letter, no one gets off the hook but everyone is offered God’s grace.

Reading Romans Backwards places lived theology in the front room of every Roman house church. It focuses all of Romans—Paul’s apostleship, God’s faithfulness, and Christ’s transformation of humanity—on achieving grace and peace among all people, both strong and weak. McKnight shows that Paul’s letter to the Romans offers a sustained lesson on peace, teaching applicable to all divided churches, ancient or modern.

Introduction: Lived Theology
Part One: A Community Needing Peace
Romans 12–16
§1. Phoebe—The Face of Romans
§2. The Greetings and the House Churches of Rome
§3. Strong and Weak
§4. Zealotry
§5. Christoformity—Paul’s Vision for a Lived Theology of Peace
§6. Christoformity Is Embodied God Orientation
§7. Christoformity Is Embodied Body-of-Christ Orientation
§8. Christoformity Is Public Orientation
§9. Know the Time Is Now
Part Two: A Narrative Leading to Peace
Romans 9–11
§10. Where We’ve Been, Where We Are, Where We’re Headed
§11. To the Weak
§12. To the Strong
Part Three: A Torah That Disrupts Peace
Romans 1–4
§13. The Opening to the Letter
§14. The Rhetoric of Romans 1–2
§15. Reading Romans 2 after Romans 1
§16. The First Question—Advantage
§17. The Second Question—Boasting in Advantage
§18. The Third Question—Abraham, Faith, and Advantage
Part Four: A Spirit Creating Peace
Romans 5–8
§19. All
§20. You and We
§21. I
Conclusion: Reading Romans Forwards, in Brief

Scot McKnight is Professor of New Testament at Northern Seminary, where he directs both a master's and doctor of ministry program in using context to interpret the New Testament. He is the author of more than seventy books, including commentaries on Colossians and Philemon and a book on Paul as Pastor. He has been married to Kris for more than forty-five years and has two children and two grandchildren.

Anyone who begins reading Romans at chapter 1 verse 1 may be forgiven for allowing their attention to slip by the time they have reached chapter 16. In this important reading of Romans, Scott McKnight offers a different way of looking at the letter—starting at the end, with the lived experience of those to whom Paul writes, and working backwards. It is a fascinating exploration of this most important letter and brings it to life in new ways. Highly recommended!

Christians typically read Romans forwards but too often stop at chapter 8 or 11, thinking they have the good stuff—the abstract theology that informs our traditional debates. In Reading Romans Backwards, McKnight reminds us that Paul’s final chapters are the crescendo of his letter, not an afterthought. He calls us to reckon with Romans as lived theology, pastoral counsel for cultivating unified communities of God’s peace.

McKnight’s style is on a popular but still profound level as he lays out Paul’s pastoral theology for the Christian community in Rome with an emphasis on reconciliation and peacemaking. This is a very helpful and refreshing perspective on Paul’s magnificent letter.

A superbly presented work of New Testament scholarship, Reading Romans Backwards: A Gospel of Peace in the Midst of Empire is an extraordinary and unreservedly recommended addition to church, seminary, community, college, and university library New Testament Studies collections.

Two things stand out from this fresh, creative reading of Paul’s greatest letter. Scot McKnight is a historian who grounds his exposition in messy, on-the-ground, first-century reality; and he loves the church and longs to see it attending not just to abstract theories about salvation but to the practical questions of how to embody the gospel in actual communities. Thus, whether or not you agree with all his interpretations, this book will compel all of us to think afresh about how Paul’s vivid theology challenges our often sleepy discipleship.

Most scholars consider Romans the jewel of Pauline theology, but McKnight has recovered Romans as a pastoral letter that communicates a lived theology to a divided Christian community in Rome. By focusing on clues about the socio-historical context especially found in the last few chapters of Romans, McKnight offers a compelling reading of the letter as a whole. He brings the text to life in such a way that the reader can imagine what it was like to be in the room when Romans was first read aloud.

Scot McKnight brings Romans to life in ways unmatched by traditional commentaries or textbooks. With eyes focused on the letter’s first audience and later interpreters in peripheral vision, McKnight responds to today’s readers’ questions with the questions that Paul sought to answer for the believers in Rome. New connections and fresh resonances emerge from this well-conceived and well-written approach to Romans.

To read Romans backwards with Scot McKnight is to experience the epistle as a pastoral intervention directed toward believing communities under stress. Read backwards, Paul’s great insights concerning justification, grace, and faithfulness reveal themselves not as doctrines received from the sky but as Paul’s active work as a missionary theologian. Accessible to students and pastors, this book will provoke scholars to examine our assumptions about Romans as well.

When you are axle-deep in mud, backward is the only way forward. McKnight lifts, spins, and energetically pushes in a new direction. Hang on tight. The church and academy are careening down an adventurous new path.

Reading Romans Backwards sheds fascinating light on Paul’s famous letter. Starting our reading with Romans 12–16 means the whole of Romans can be seen as a pastoral letter addressed to Jewish Christians and Gentile Christians in Rome, speaking about privilege and power, and replacing both with the peace of Christ at the heart of the empire. Working backwards creates a whole new set of connections and unwraps Romans as lived theology of the grace of God. 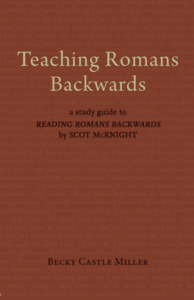 Purchase the study guide in print for $19.95 HERE.