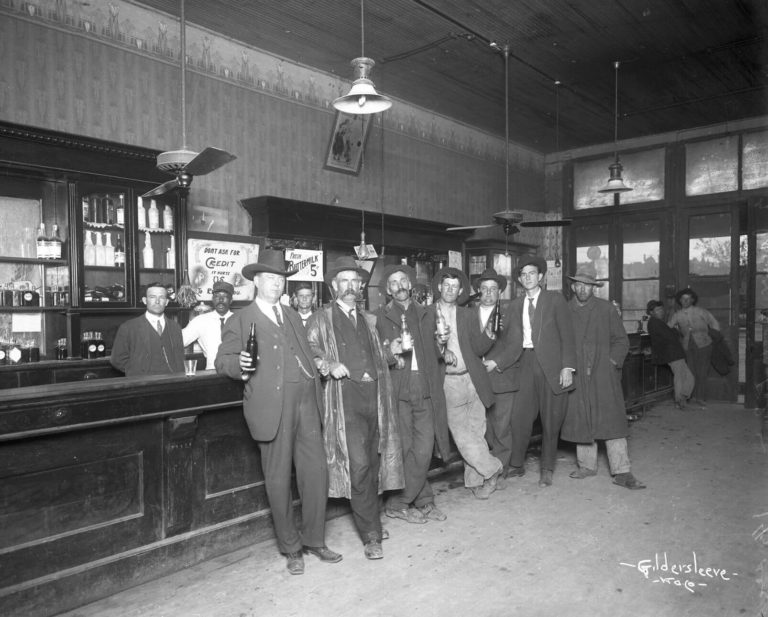 It’s an image that could inspire an epic John Ford Western movie.

Their hats tilt at jaunty angles, their boots are covered in dust or mud. An imposing man with a watch chain and three-piece suit gives the camera a stern side-eye from beneath his hat brim. Over his shoulder, An African-American bartender stands with a stoic, heavy-lidded expression in front of a sign that says “Don’t ask for credit: It hurts us to refuse you.”

Down the bar stands a grubby-looking man with a 100-yard stare and a foot stuck out as if challenging the viewer to a fight. By the screen door a couple of boys look up as if startled to be caught by the flash in this den of sin.

The image from 1916 is one of 186 Gildersleeve photos in a new coffee-table book, “Gildersleeve: Waco’s Photographer,” created by the staff of Baylor University’s Texas Collection and published by 1845 Books, an imprint of Baylor University Press. It is the first book-length collection of Gildersleeve’s photos, which capture in unrivaled detail a restless Texas city on the rise in the first quarter of the 20th century.

Baylor Press Director Carey Newman said Gildersleeve captures the excitement and pride of Waco a century ago, similar to the spirit of Waco today.

“At the very moment Waco is reimagining itself, a book like this shows that the dreams we now entertain were also dreamed by those before us,” Newman said.

“The joy for (Baylor) Press in doing this book right now is because so much conversation about Waco is taking place by so many people. This book documents our past, but his book is also fodder for our future.”

The book, which costs $49.95, can be preordered at http://www.baylorpress.com and will arrive at local bookstores Saturday. A book-signing event and lecture is planned for 6 p.m. Nov. 8 at the Mayborn Museum.